It has been said already elsewhere how difficult it can be to deal, as a movement, with the disparities of situations and attitudes towards homophobia across the Union. It is quite clear that there is a wide gap between the situation in very liberal countries such as the Netherlands for instance, and Poland, where taking part in a gay pride would actually put your physical integrity in danger. 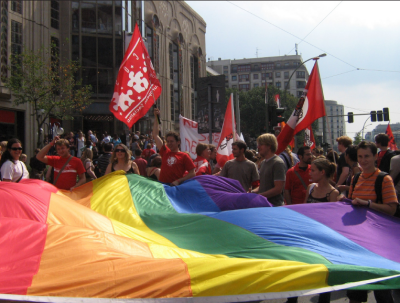 But if the legal situation looks better, does it mean that being queer is any easier in those countries? Yes, probably, but for all that, homophobic attitudes are still firmly rooted, the stereotypes are still there, and claiming your sexual orientation is still something of a via dolorosa. To convince oneself of that one only need to look at statistics when it comes to suicide: young homosexuals, especially young males, still make the bulk of the numbers.

I personally think it would be a mistake to onsider queer people as a class in the Marxist sense of the term. Thinking that a young LGBT person in an upper middle class environment has the same resources to confront the difficulties of coming out of the closet than someone coming from, say, a impoverish migrant background is plain wrong. If only because openness to queer rights is very much a question of education, and in last resort because enforcing your right is also a question of access to justice. And we still live in a society where both the educational and judiciary systems are class-ridden ones.

Well, in spite of the revolutionary flame that lights our long nights of discussion and activism, it is not very likely that we, as young socialist and social-democrats, we manage to change that during our life span, I can already hear some say. Indeed, but in terms of education at least, there are things we can do. And, thinking back to those young queers from migrant backgrounds I mentioned before, I think it is even our duty, as young socialist and social-democrats to actually do something. And that is opening up our movement. We are still far too much a group of white upper-middle class gentlemen, failing completely to reflect the full diversity of the society we are calling for in our positions. By going out and bringing in the groups we claim we are defending, we can do a lot in terms of education and open-mindedness.

Ok, this might not be much… but it is what I’ll bear in mind walking alongside the gay pride in Brussels on the 17th. That and the image of my comrade deputymayor Ahmed Elktibi, slandered by a large part of his electorate, not for being gay, but for having celebrated the installation of a monument dedicated to the memory of victims of Homophobia in Belgium.


Warning: count(): Parameter must be an array or an object that implements Countable in /homepages/27/d13355265/htdocs/qe2014/wp-includes/class-wp-comment-query.php on line 405