we warmly invite you to our annual Queer Easter seminar. It will take place from 21st of March till 28th of March 2016 in Werftpfuhl and our thematical focus this year will be on community accountability. You will get more information about the draft program in three weeks.

Please register here online for the seminar:
https://kurtloewenstein.wufoo.com/forms/queereaster-2016-registration/
The deadline for registration is the 10th of March. If you need a visa to enter Germany, we will need all the data for the visa application by the 15th of February.

The participation fee per person depends on the country you come from and will be between 30 and 80 €. For some countries we might be able to provide limited travel cost contributions. If you have any questions, if you need more information, if you have any remarks, do not hesitate to contact me. For people coming from YES (Young European Socialists) member organizations, special conditions apply, a special info will circulated in the next days by Yes-secretariat.

If you have any questions, do not hesitate to contact me.
j.baneth@kurt-loewenstein.de
+49 (0) 33398899917
Best regards from Werftpfuhl and looking forward to see you/your organization at Queer Easter 2016,
Jane and the Queer Easter Team

we warmly invite you to our annual Queer Easter seminar. It will take place from 30.03. till 06.04.2015 and our thematical focus this year will be on “Let’s talk about sex, comrade – Building a socialist sex positive alternative”. You will get more information about the draft program in two weeks.

The deadline for registration is the 15th of March. If you need a visa to enter Germany, we will need all the data for the visa application by the 1st of March.

The participation fee per person depends on the country you come from and will be 30-75 €. For some countries we might be able to provide limited travel cost contributions. If you have any questions, if you need more information, if you have any remarks, do not hesitate to contact me. For people coming from YES (Young European Socialists) member organizations, special conditions apply, a special info will circulated in the next days by Yes-secretariat.

If you have any question, so not hesitate to contact me.

Two teams of regional tv-stations were in the house during the seminar week. Both productions are in german.

Here you will find the program of  Queer Easter 2014.

by Simon and Elena

Can Activism be queer-socialist? How can we self-organise in an emancipatory way? We will try and answer these two questions by looking at different forms of queer-socialist activism and explore and how they work and what values lie behind them. In addition we will look at ways of selforganising and motivation in our own organisation. Join us if you are not afraid of a self organised journey through cheers, motivation and some world changing !

by Amina, Laura and Christine

The minute you are born you are told that you are a boy or a girl and that there are no other possibilities. This leads to stereotypes, bullying and discrimination which young children are already experiencing. Therefore it is important to educate and empower children from a young age to live in a society outside of heteronormativity.

In our creative working group, we will develop and try out educational activities for children on identity and bullying. If you have experience with working with children, interested in doing so or simply like to use your creativity, come and join us for a FUNtastic working group!

Our Bodies – our Queer Socialism

by Vicky and Sophie

Queer Guide to the Galaxy (Discrimination in the Workplace)

by Nitzan and Jeroen

Queer-feminist approach to discrimination and harassment in the workplace

Homonationalism: or how to do international queer solidarity without being shitty

by Kirsty and Amit

LGBTQ outside the West

by Lisa and Ivana

Feminism and Gender in Activism against Transphobia and Sexism (FAGAATS)

by Sarah and Kris

In our CWG we are going to go through such subjects as gender, feminism, sexism and transphobia, especially in the context of activism. We will take a look at our own behaviour as well as the workings of our organisations and build a toolbox of dealing with transphobia and sexism in us, our organisations and a wider context. Although these are serious topics we will include elements of fun.

Here you can find a pictured list of the Queer Easter Team 2013. 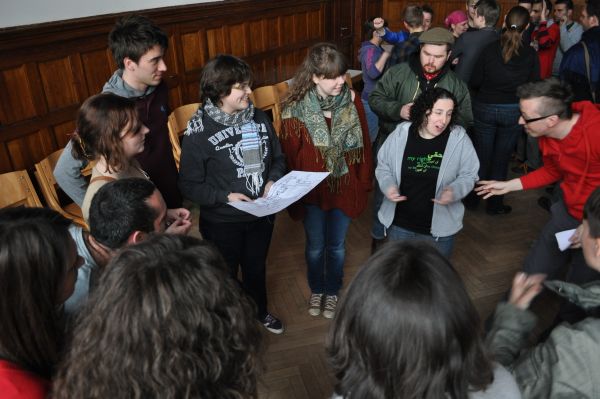 English voices echo through the brightly decorated staircase of the Kurt Löwenstein House (KLH). On the first floor young people squeeze, look at announcements or fill into lists. They need to decide before lunch, which topic they want to focus on this week. The offered themes include: What potential has the changing society for non-heterosexual families? What were the gender relations exported by European imperialism? 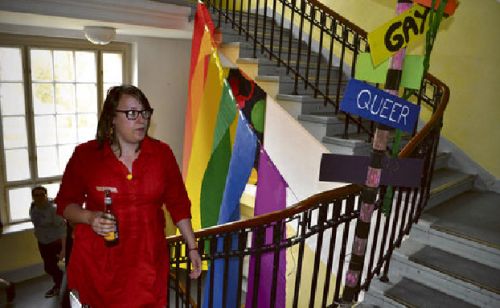 The KLH in Werftpfuhl (Barnim), which is the federal education center of the socialist youth “Die Falken”, is regularly running seminars with participants from many countries. But for now the house is decorated with rainbow flags, a symbol of the LGBT movement because it is “Queer Easter”. The term “LGBT” stands for lesbians, gays, bisexuals and transsexuals. “We have taken the word “queer” because this term includes a variety of sexualities,” said Tim Scholz.

Scholz is education officer at KLH and primarily responsible for the international seminars . On the 13th Queer Easter 105 people aged between 18 and 28 years came as guests in order to discuss “same-sex lifestyles in the tension between traditional family structures, social norms of expected behavior and emancipatory forms of life”. The seminar is organized by a team of 20-members, (relatively young) members from 12 countries, who work voluntarily – most of them have been Queer Easter participants before, says Scholz.

This annual seminar week was developed in the KLH and the first time there were only 30 young people. Meanwhile, it is intended primarily for multipliers, people who do education themselves. In addition, it has grown considerably – Scholz knows of no larger seminar in Europe on the topics of LGBT rights and gender-role criticism. The 125 people in the house are coming from 31 organizations of voluntary youth work in 19 countries. The focus this year is the criticism of the bourgeois nuclear family.

Here, people from different backgrounds meet and informally exchange in the evenings in Kellerbar. The young people can tell each other about the political situations in their countries, and about their educational work. So the problems are well known: “In Poland one cannot talk about homosexuality in schools,” says Tim Scholz. “In Serbia, there were even attacks by hooligans on spaces of LGBT organizations. Other problem-cases are in Belarus and the Arab minorities in Israel. Some of the organizations have to be careful in everyday life. If they participate in Queer Easter, some do not tell at home exactly where they go,” replies the KLH-employee. 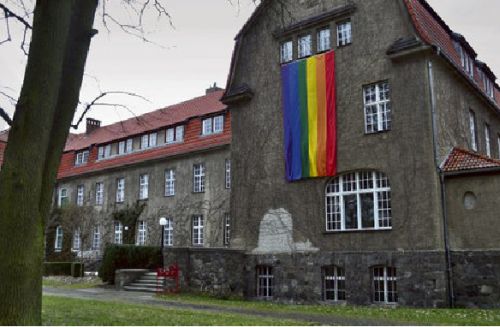 Not only the geographical origin of participants is diverse. “It is exciting to bring together the political left and LGBT” says Scholz. “We have to carry LGBT issues out of own community.”

It is significant that “Die Falken” are the only German organisation that is attending Queer Easter. Is this seminar still unknown after 12 years? Tim Scholz says no. “We have presented Queer Easter on the German children- and youth symposium, the largest conference for children and youth work, he says. “Of more than 80 events our Queer-Easter-presentation was the only one on LGBT. It is a niche topic. The question is: How do we sustainably address this issue inside the heterosexually-dominated society? Otherwise there is no equality.”

Some political organizations have shown their interest in this subject. For example a small group, which is gathering after lunch in the KLH kiosk area. The four young men come from socialist youth organizations abroad. For instance the 21-year-old Alessio from Florence. He belongs to “Giovani Democratici ” a youth organization of the “Democratic Party” in Italy, and would like to prepare here for an intra-party struggle for LGBT rights. Aldo, 28 years old, was studying in Linz in Austria and came through the association of socialist students to Queer Easter. This year it’s his fourth time, “because there are always new things to learn. Here, many aspects of daily life come up.” Dewi from the Netherlands has been to the KLH before, since her organization runs seminars here. The 24-year-old, who lives near Utrecht, is fully aware of the fact that she lives in a privileged country in terms of LGBT rights, and she wants to learn about the situation in other countries. Also some people from Berlin participate in Queer Easter. Denise, 19 years old, has become a member of the German falcons just a few month ago, but she has come to the KLH for years, for example to summer camps. The atmosphere and the program here are always great – so is Queer Easter: “So many things are put across here. You cannot find this anywhere else.”

Meanwhile in one of the seminar rooms, Kris an Udi are preparing a workshop. Both come from a LGBT background. Kris, 32 years old, was active in the largest LGBT organization in Poland called “Campaign Against Homophobia” and is now the fourth time at Queer Easter, for the second time as a member of the team. The 24-year-old Udi comes from Haifa, was also here several times and he now assists. Together they team a group of men – the participants are divided according to their gender for this session, which deals with the topic “safe sex”. Which STDs can be transmitted from oral and anal intercourse or the use of sex toys? What kinds of AIDS tests are there? Is trust a reasonable basis for unprotected sex? Does sex without a condom feel better? Also “thinking ahead” to always have condoms in the house, is reminded. Subsequently, Kris and Udi distribute some rubbers. The participants seem to be well informed about most of the discussed issues.

Afterwards all participants are engaged to discuss the links between the popular family-model and capitalism. It has the impression that Queer Easter operates in both: sexual education as well as historical and political matters.